Over the past four decades Dunstan Thomas has been an established name in developing software across industry sectors. Systems have been developed in financial services, telecoms, retail, energy, military, aerospace and other sectors throughout the UK and EMEA regions.

Dunstan Thomas develop software with a focus on exceptional user experience. The teams include UI/UX designers that bring software applications to life with digital experiences that support complex user journeys and workflows.

Our developers at your disposal

Numerous technology frameworks, languages & databases are available to develop software, the technology used being dependent on the chosen architecture. Dunstan Thomas is a Microsoft Gold ISV & ALM Partner, and experts in the Microsoft technology stack amongst others. Our technology capabilities include:

Dunstan Thomas has a robust and repeatable approach to projects. Our development methodology is Agile SCRUM with the delivery aspects split into phases.

These phases break down into sub phases (sprints) reflecting the Agile SCRUM development methodology. The diagram illustrates the phases as they occur over time and the work activities that occur during these phases. 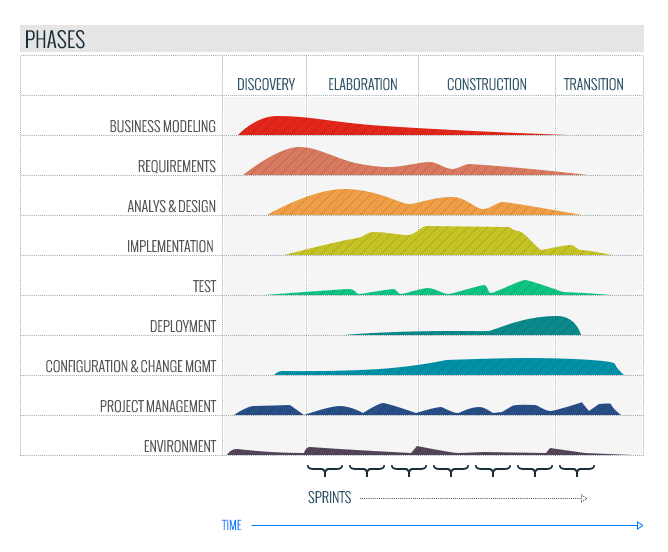 The purpose of this phase is to understand, document and agree the project vision, goals, business domain, high-level architecture, deployment configuration and initial project scope. The Discovery phase is run as a series of workshops. Outputs of the Discovery phase include:

The purpose of the Elaboration Phase is to build and deliver a prototype that forms part of the overall solution. This is done so that technical and other project risks are eliminated or reduced. There are two approaches to selecting which component or subsystem should be developed in this phase:

Elaboration is conducted in Sprints of either 2 or 3 weeks duration.

The purpose of the Construction phase is to build all requirements within the scope of the project. Development is broken up into sprints of 2-3 weeks with continuous build and testing of the software throughout the process.

It is usual for the development team to be expanded during Construction reflecting the ability for work streams to be developed in parallel.

During the Construction Phase, regular reviews and retrospectives are held with the Client to ensure that early visibility is given, and so that both parties prioritise remaining work based on the business needs and requirements.

This incremental and iterative approach to building software enables and encourages more functionality to be delivered throughout the project.

The Transition Phase represents the point in the project plan where it is being completed, and any remaining hand-over or deployment requirements are considered. Not all projects include a formal Transition Phase, but it can include some or all of the following tasks:

Dunstan Thomas Consulting is part of the Dunstan Thomas Group of companies that specialise in the delivery of innovative technology solutions.

27 September 2021
27 September 2021
23 August 2021
We use cookies on our website to give you the most relevant experience by remembering your preferences and repeat visits. By clicking “Accept All”, you consent to the use of ALL the cookies. However, you may visit "Cookie Settings" to provide a controlled consent. You can view our cookie policy here.
Cookie SettingsAccept All
Manage consent

This website uses cookies to improve your experience while you navigate through the website. Out of these, the cookies that are categorized as necessary are stored on your browser as they are essential for the working of basic functionalities of the website. We also use third-party cookies that help us analyze and understand how you use this website. These cookies will be stored in your browser only with your consent. You also have the option to opt-out of these cookies. But opting out of some of these cookies may affect your browsing experience.
Necessary Always Enabled
Necessary cookies are absolutely essential for the website to function properly. These cookies ensure basic functionalities and security features of the website, anonymously.
Functional
Functional cookies help to perform certain functionalities like sharing the content of the website on social media platforms, collect feedbacks, and other third-party features.
Performance
Performance cookies are used to understand and analyze the key performance indexes of the website which helps in delivering a better user experience for the visitors.
Analytics
Analytical cookies are used to understand how visitors interact with the website. These cookies help provide information on metrics the number of visitors, bounce rate, traffic source, etc.
Advertisement
Advertisement cookies are used to provide visitors with relevant ads and marketing campaigns. These cookies track visitors across websites and collect information to provide customized ads.
Others
Other uncategorized cookies are those that are being analyzed and have not been classified into a category as yet.
SAVE & ACCEPT